CCCO’s second annual Summer Celebration offers a program featuring the regional performance premiere of a work by American composer William Grant Still. In 1931, Still became the first African American composer to have a symphony debuted by a major American orchestra. Success continued for the composer in 1936 when he became the first African American to conduct a major orchestra, leading the Los Angeles Philharmonic at the Hollywood Bowl. A concert highlight features Clarinetist David Dziardziel performing Aaron Copland's majestic and jazz-filled Clarinet Concerto, a piece commissioned by jazz clarinetist Benny Goodman in 1947. The concert concludes one of Edvard Grieg's famous Lyric Pieces for strings, Erotik and Morton Gould’s set of Spirituals for Strings and Harp, featuring harpist Charles Overton.

In its first year, CCCO presented six unique programs, premiered four new compositions through its composer-residency program and collaborated with local visual artists, poets, and nonprofits. Reflecting on a solidly successful inaugural season, Music Director Scinto is inspired.  “Classical music has launched a new chapter on the Lower Cape, filled with the energy, life and excitement that our musicians bring to every concert. The connection between the composer, our audience and the musicians is continually palpable during our performances.”

This summer’s concert extends CCCO’s celebration of its first full year with the Cape Cod debut of Serenade for Orchestra by William Grant Still. With the performance of this piece, CCCO continues its mission to provide the Cape with concerts featuring works by composers who have traditionally been under-represented in concert.  “When I discovered the music of William Grant Still, I knew immediately that we needed to perform his music,” shares Scinto.  “The listener’s heart and soul are captured from the first few notes of this Serenade.”  Scinto feels the same can be said of Morton Gould, the composer famous for American Salute, but featured on this program for his Spirituals for Strings. “His take on traditional spirituals are all at once melancholic, extremely optimistic and exciting,” says Scinto.

Committed to artistic integrity and excellence, Cape Cod Chamber Orchestra’s mission is to connect the diverse arts communities and individuals of Cape Cod inclusively. By collaborating with other disciplines of art and culture, the orchestra aims to create unique concert experiences while providing exciting, enriching and memorable orchestral music.  Featuring living composers is at the forefront of the orchestra's mission; bringing audiences closer to the music of modern time, positioned as an essential and educational element to each performance program.  Other repertoire will have an emphasis on championing the works of living composers, as well as the music of the classical canon.

Tickets to Summer Celebration are $35 general admission. Tickets are available at capecodchamberorchestra.org, by calling 508-432-1668, or at the door by cash or credit card. 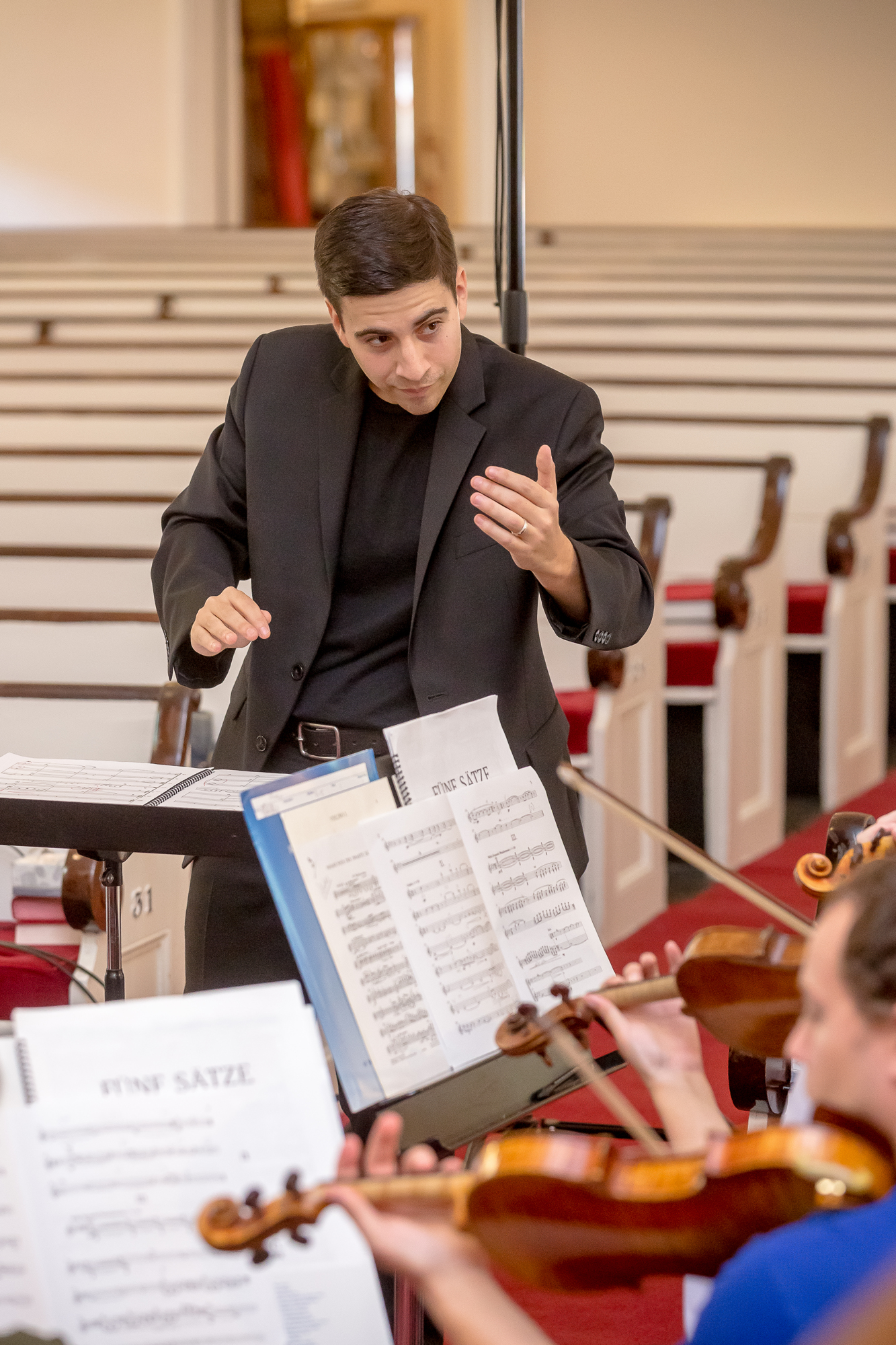 Matthew Scinto is an emerging conductor based in Cape Cod, where he currently serves as the Assistant Conductor of the Boston Civic Symphony under Music Director Francisco Noya. Mr. Scinto received his Doctor of Musical Arts degree in Conducting from Boston University, where he was a student of Stefan Asbury and David Hoose and twice received the Conducting Department Award for Excellence in Conducting. Mr. Scinto has studied conducting at the prestigious Tanglewood Music Center, and was invited back again in July 2018. While at Boston University, Mr. Scinto served as the Assistant Conductor of the Boston University Symphony, Chamber, and Opera Orchestras where he covered and conducted in numerous concerts and opera productions, including Boston University's recent production of Le Nozze di Figaro in 2017. Matthew Scinto has worked with conductors Bramwell Tovey, Ken-David Masur, Stefan Asbury, Diane Wittry, Daniel Hege, Marin Alsop, David Effron, and Markand Thakar. He has conducted such orchestras as the Baltimore Chamber Orchestra, Symphoria, the New Haven Civic Orchestra, the Brandeis-Wellesley Orchestra, the Greater Bridgeport Youth Orchestras, the Indian Hill Sinfonia, the Miami Music Festival Orchestra, the Syracuse University Symphony, and the Boston University Symphony and Chamber Orchestras.

An avid chamber musician, David has collaborated with some of the world’s finest artists, including legendary harpist Ann Hobson-Pilot; violinist Susie Park, former member of the Eroica Trio; and Kojiro Umezaki, world-renowned shakuhachi player and Silkroad Ensemble member. Performances have taken him throughout the United States and Japan. He has appeared in Music for Salem, the Rockport Chamber Festival, and the Sarasota Festival. David is also a founding member of Calliope Winds, a wind quintet that has been praised by The Boston Musical Intelligencer as “a highly experienced, technically adept, and mightily talented ensemble.”

As an advocate of contemporary music, David is the clarinetist for Hub New Music (HNM), a critically acclaimed chamber ensemble comprised primarily of flute, clarinet, violin, and cello. Hailed by The Boston Globe as “elegant and exacting,” HNM maintains an international touring schedule while contributing to the vibrant new music community at home in Boston. Its performances have been showcased in some of the world’s finest halls, such as Boston’s Jordan Hall and Tokyo’s Suntory Hall. Recent collaborations include those with composers Angel Lam, Andrew Rindfleisch, Kati Agócs, Robert Honstein, and Daniel Wohl.

David began studying the clarinet at the age of 14 through the University of Hartford’s Community Music Division with Dr. Richard Shillea and Alan Francis. He then went on to obtain his Bachelor of Music from The Boston Conservatory, where he won its annual concerto competition in 2011 and studied with Michael Norsworthy. Most recently, David earned his Master of Music from the New England Conservatory under the tutelage of Richard Stoltzman.

Committed to artistic integrity and excellence, the Cape Cod Chamber Orchestra’s mission is to connect the diverse arts communities and individuals of Cape Cod inclusively. By collaborating with other disciplines of art and culture, the Orchestra aims to create unique concert experiences while providing exciting, enriching and memorable orchestral music.  Featuring living composers is at the forefront of the orchestra's mission; bringing audiences closer to the music of modern time, positioned as an essential and educational element to each performance program.  Other repertoire champions the works of living composers, as well as the music of the classical canon.  For more information visit www.capecodchamberorchestra.org, email [email protected], or follow Cape Cod Chamber Orchestra on Facebook and Instagram.