This summer, as we've done for the past couple years, we'll take the small boat with the flaking paint job and semi-reliable outboard motor out the Oyster Pond, down the river, around the corner of Stage Harbor and into Nantucket Sound. Hugging the coast of Morris Island, we'll head east along the tight channel and eventually cross over toward the northwest corner of North Monomoy Island. 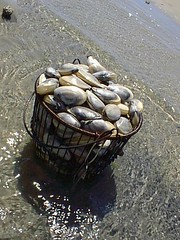 Approaching the shallows - the flooded expanse that is the Common Flat running well west from Monomoy into the Sound --- we'll cut the engine (assuming it is still running) far from the sand bars that expose themselves for hours during low tide. The clear, clean water around us will be maybe two feet deep. We will be far from any land that is reliably dry, yet the depth of the water for hundreds of yards will be nothing more than up to my knees.

The anchor dropped, we'll settle into a lunch of peanut butter and jelly sandwiches and chips, washed down with pink lemonade, and juicy red plums for dessert. Then it will be into the water, donning the masks and flippers, and armed with dip nets for some serious snorkeling.

This discovery was made when I beached the boat on the edge of the flats, and had gone to test the area with my clam hoe. Sofie had never been clamming before, so it seemed this hot and sunny July day was a prime opportunity. What I didn't expect to find was nothing. There were just no siphon holes at all in an area where I had always been able to find some clams. We walked up and down the edge of the beach, expanded immensely by the dropping tide, and found no clams, no holes, and of course, no clam diggers.

Pushing the boat off the shore, wading back towards the channel, I was reassessing our plans when something very strong and sharp clamped on my toe. I nearly jumped straight up into the boat. It was a sand crab, just below the surface, unhappy with my intrusion. I donned my pair of black neoprene scuba boots, and maneuvered the boat along the south edge of the channel and into the acres of water that is never quite exposed, nor never quite deep enough to take a boat. We tethered our inner tubes to the boat and floated on the surface, face down with our new masks and snorkels.

Every once in a while, we would see a crab skitter by, and I'd grab my basket rake and pull it up into a bucket. With a little water to rest it, the crab would receive a name and probably a serenade from Sofie while back on the boat. (They are too small to eat, really.) Then it would be returned to the sea, and we'd set off on search of some other prize.

It would be easy to conclude the bounty of clams that were once here have been decimated by sand crabs. It is probably no more their fault than any clammer using a simple wooden-handled rake. But clams are cyclical. Here today, gone tomorrow...here again. Currents change, which affects the flow of nutrients. With South Beach connected to Monomoy, the Atlantic doesn't wash in here as it once did. Depths of this soft sand change.

The area just north of here, between the east coast of Morris Island and the west shore of South Beach, is becoming more sheltered, and has an environment more conducive to scallops and quahogs. So this is not exactly bad news.

This all brings to mind, however, the ongoing struggle with the federal government regarding the continuing right of Chatham commercial shellfishermen to harvest clams from the flats surrounding Monomoy Island. So much effort and money has been spent on making a case to the policy makers in Washington, and yet the same issues face us, as unresolved as ever. The feds feel restrained by federal law, the politicians are afraid of national environmental groups, and those groups oppose based on principle.

As a selectman, I suggested perhaps, as the town of Chatham builds it case based upon the science and the unique history of shellfishing on Monomoy, that we initiate dialogue with the individual members of the organizations that were reportedly threatening all sort of actions should commercial shellfishing be allowed to continue here. We had heard from our elected representatives and legal counsel that this was a bad idea. No explanation, but this was the "let the process work itself out" argument.

Of course, these same people giving this advice were the one who stood to benefit from acting as intermediaries with, as they put it, "the bird people." As if they were a bogeyman. Not enough grains of salt were taken with their counsel, then. Politicians will tend to do the thing that gets them the most attention with the least amount of courage. Lawyers will tend to use up every dollar of a retainer that is advanced.

To be honest, I can no more fault them for their nature any more than a crab pinching my toe in the sand as I walk by. The crabs are neither the problem nor the solution. They have become a distraction. If we are serious about fixing this ongoing concern, then we need to start talking to the people with whom we differ, and find how wide the distance really is between our positions on this one area we care for.

Read this and Andy's other columns online at The Cape Cod Chronicle.

Novelist, politician, photographer, game designer, master mariner, clamdigger and investigator, Andy Buckley is an eleventh-generation Cape Codder with a Renaissance flair. His Tours of Cape Cod  was published by Schiffer Books in 2008. Read Andy's Monomoyick column in the Cape Cod Chronicle and visit Monomoyick on YouTube and on Panoramio. Andy can be emailed here.